Cooperation and communication within and across species 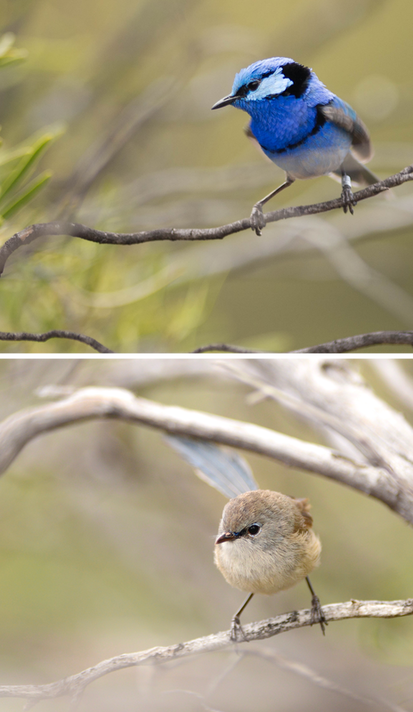 Top: male splendid fairywren; Bottom: young male purple-backed fairywren in intermediate plumage
Social behavior is extraordinarily diverse, ranging from brief interactions to lifetime associations and can be limited to members of the same species or span multiple. Why do we see such diversity in social behavior, why and when do animals choose to be social, and when individuals interact with members of different species how do they mediate interactions? My research addresses two types of social behavior, cooperative breeding—a form of social behavior in which helpers aid a breeding pair in caring for non-descendant young—and mixed species associations in birds.

I study the splendid and purple-backed fairywrens (Malurus splendens and M. assimilis—formerly known as the variegated fairywren, M. lamberti assimilis) in South Australia with my collaborator, Dr. Steve Pruett-Jones. These two cooperatively breeding species live in the same habitat, yet are drastically different in their social behavior. Purple-backed fairywrens are nearly obligate cooperative breeders, rarely fledging young without the presence of helpers while splendid fairywrens at our field site only rarely have helpers. Purple-backed fairywrens can live in social groups of up to 9 individuals with both male and female helpers, splendid fairywren social groups are typically composed of only a breeding pair or a breeding pair assisted by one or two sons. We use experimental studies to ask why helpers in these two species delay their dispersal or join groups to become non-breeding individuals. We also collect data on nest success, paternity, provisioning behavior, and survival to understand if cooperative behavior is beneficial, who it benefits, and when. Check out our recent paper on extra-pair paternity in the purple-backed fairywren here!

In addition to living in family groups, these fairywrens also share territories with one another. While mixed-species associations are common in nature and in birds especially, mixed species flocks are often hard to monitor because of the number of individuals or species involved and the sometimes ephemeral nature of these associations. Because splendid and purple-backed fairywrens can associate with the same individuals of the other species on a joint territory for years and we know each individual of both species, this system presents a unique opportunity to examine why these associations occur (do they choose to associate or are they making the best out of a bad situation?), how they mediate interactions (do they know who they are associating with?), and what information they share with each other. Our recent work shows that these two species use song to distinguish birds of the other species that they share their territories with from those they don't.

Fairywrens are loved by birders and scientists alike for their brilliant plumage and gregarious nature. Most Australian fairywrens have bright males and brown or light blue females. Young males begin life looking like their mothers before moulting into their breeding plumage, but there is great variation in when these young males attain their breeding plumage, from their first spring up to four years later. In addition, there is variation in when in the season males moult from their eclipse or wintering plumage back into their breeding plumage. Timing of moult is known to impact extra-pair mating success in superb and red-backed fairy-wrens, with males who moult into bright plumage earlier in the non-breeding season having greater mating success. Dry conditions can delay moulting for males in some populations, which means that changes in climate can impact timing of moult and mating success. Climate may further impact social group size by either limiting the number of birds a territory can support or by making cooperation more critical to reproduction.

To understand how timing of moult, sex ratio, and social group size vary within and across fairywren species in relation to ecology and climate, Joe Welklin and I began the Fairywren Project. The Fairywren Project is an endeavor to link long-term studies on fairywrens with continent wide patterns of social behavior and moult using observations made by citizen scientists. Check out the Fairywren Project and eBird Australia websites to learn more about our research goals and to learn how to participate. You can also follow the project on twitter @FairywrenProj or on Facebook.

My postdoctoral advisor, Dr. Dai Shizuka and I are working understand the impact of demographic processes on long-term temporal dynamics of social networks. We are doing this in two ways. We are utilizing long-term data on social species which captures nature changes in population composition in a number of different species with very different social systems. We are also developing social network models which integrate individual turnover with different rules of node attachment to simulate how structure can develop from a random network. Check out Dai's other research and that of the other members of the lab here!